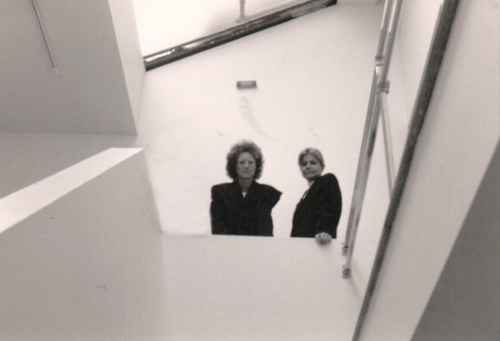 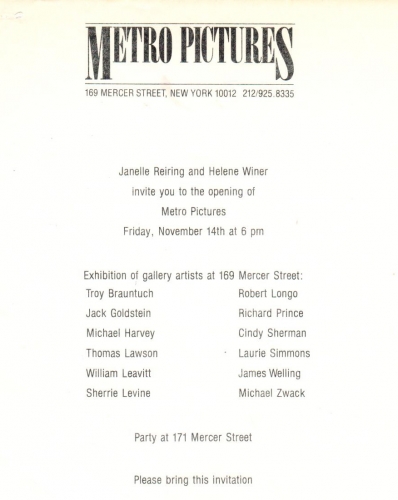 Longo begins 1981 with his “Men in the Cities” drawings, besuited men and elegant women falling through the air. Exhibitions are about three weeks long, and nine artists have solo shows before summer starts, including Prince, Simmons, Troy Brauntuch, Thomas Lawson, and Sherrie Levine, whose exhibition closes on June 5, just days after Kasper König and Laszlo Glozer’s epic “Westkunst” opens in Cologne, with work by Goldstein, Brauntuch, and Longo on hand.

In November, Sherman exhibits color photographs—unsettling ones that will come to be known as “Centerfolds.” Peter Schjeldahl tells the New York Times years later that he saw them and dashed to a payphone to call his editors, but learned it was too late to pitch a review. “I had to write something that day, and it turned out to be a check,” he says. (He pays in installments.)

It’s 1982. Documenta 7, curated by Rudi Fuchs, brings about 387,000 visitors to Kassel, Germany, in June, plus five Metro artists (Levine, Sherman, Brauntuch, Goldstein, and Longo). Mike Kelley debuts in September with Monkey Island and Confusion, as does Louise Lawler, arranging artworks by other artists and presenting deadpan photographs of other arrangements, and Walter Robinson, with paintings that borrow from pulp novels and movie posters. In 1983 there are shows of Eva Hesse, then Longo, Simmons, and William Leavitt. The gallery moves one block over, to 150 Greene Street in October. “Artists Call Against U.S. Intervention in Central America” runs for eight days in 1984, from January 14 through 21. 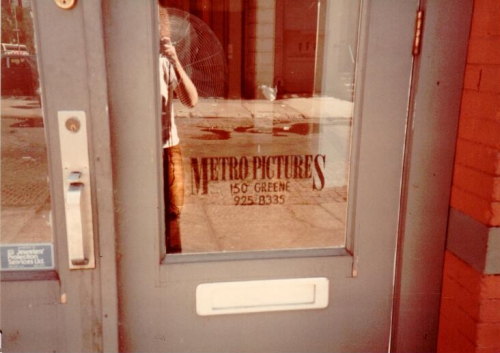 John Miller enters in 1984, as well as a Dutchman, René Daniëls—and there’s a group show on October 20 with a bunch of Germans (Werner Büttner, Martin Kippenberger, the Oehlens). Frank Gehry displays plastic-laminate lamps resembling fish and snakes, which he conceived after throwing the material on the ground and deciding that he liked how the shards looked.

Kippenberger’s first one-person effort outside Europe opens May 25, 1985, and closes June 15, the same day that a man attacks Rembrandt’s Danaë (1636) with sulfuric acid and a knife at the Hermitage in St. Petersburg. (Conservation is completed in 1997.) A year later, Robinson shows his “spin paintings.” Seven years after that, Damien Hirst attempts the medium. 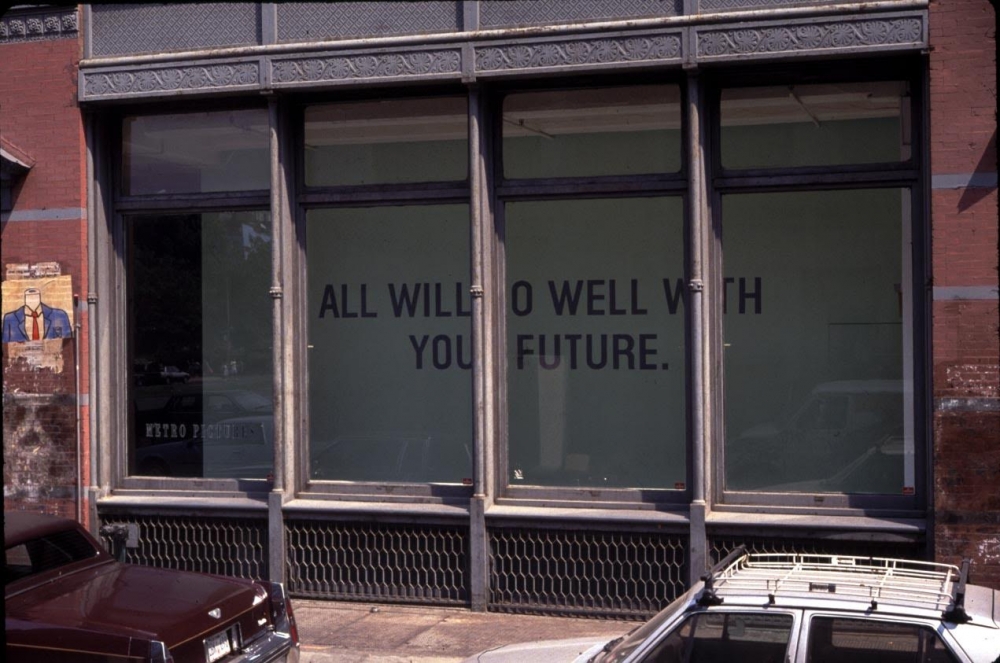 Seventy-two art dealers and 600 artists sell work under the banner of “Art Against AIDS” in 1987, and on June 4, Leo Castelli, aged 89, hands a check to Elizabeth Taylor at a benefit. “I just love men with checks,” the Times reports her telling him. 1988. Gretchen Bender. People in Pain. Mike Kelley. PANTS SHITTER & PROUD P.S. JERK-OFF TOO. And, More Love Hours Than Can Ever Be Repaid and The Wages of Sin.

Steven Parrino in 1989, Sherman’s “History Portraits” and Kelley’s “Arenas” in 1990, Fred Wilson’s “Primitivism” in 1991—and Jim Shaw’s “Thrift Store Paintings,” with scores of wild discoveries from scattered shops alighting in another. The next year, more than 15 of Kippenberger’s paintings sit in his Dumpster. 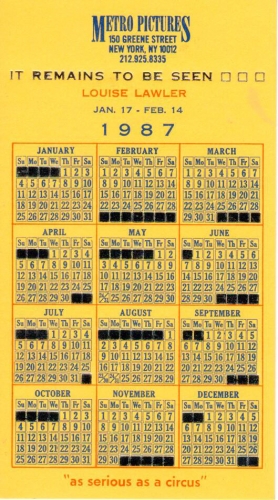 The New York Times reports on March 14, 1993, that Radio Hula, “an exotic store in SoHo” at 169 Mercer, “is thriving on the sale of everything Hawaiian . . . Entering the store, with its yellow and brown decor and sweet aroma, is like walking into a field of pineapples.” On September 18, huge banners by Gary Simmons are hung: “ROOTS,” “ORIGINAL MAN.” In 1993, Offshore Gallery hangs up its shingle in East Hampton and will go on to do shows with Prince, David Salle, Ross Bleckner, and others. Operating until 1995, it’s run by Winer, Reiring, Rachel Lehmann, and David Maupin, a director at Metro at the time.

1994: Shaw’s “Dreams That Money Can Buy” and Tony Oursler’s first display of deranged, foreboding video sculptures at the gallery. After working at Metro and operating a gallery out of his apartment, Friedrich Petzel opens a SoHo storefront. 1995: Ronald Jones’s bonsai sculptures and the acquisition of a full set of Sherman’s 69 “Untitled Film Stills” by the Museum of Modern Art, which shows them in 1997.

In a May 13, 1996 New York story about galleries relocating to Chelsea, David Zwirner is skeptical. “First of all, you should be able to take a train, and you should be able to get a decent meal,” he argues. Near the end of the year, which has seen ghostly wall drawings by Gary Simmons and menacing new portraits by Sherman, Metro leaves the stores of SoHo behind for 519 West 24th Street. The artists are ready for a change, Winer tells the Times. “I’m not sorry for the gallery, but for me, personally, I enjoy that kind of action. You know, I just like to go shop.” 150 Greene become a Blue Fish clothing store, then Moss. 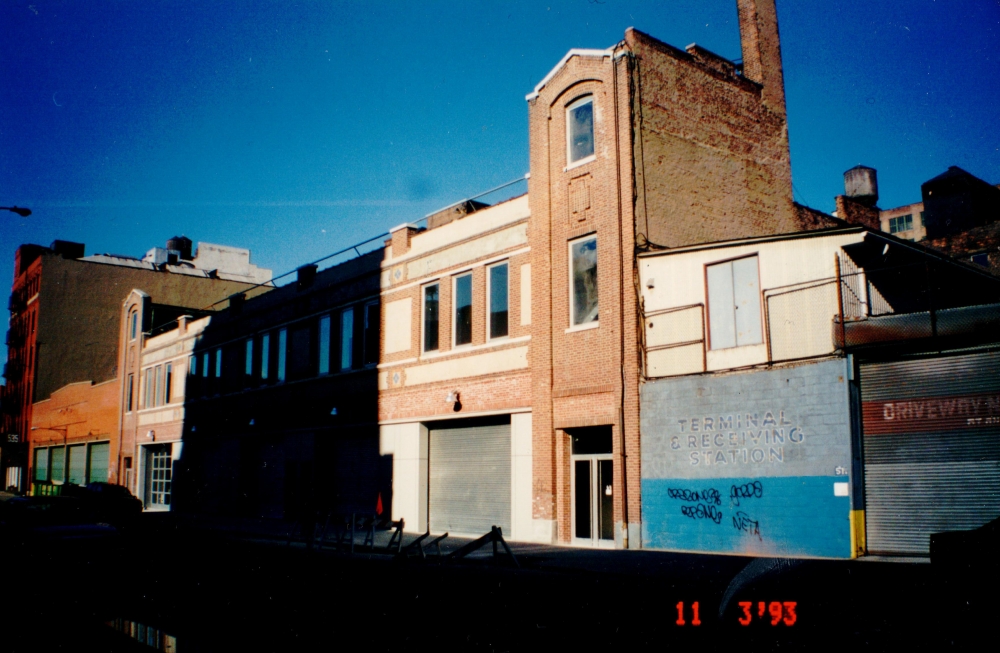 There is a one-day preview of the new space on November 17, 1996, followed by more construction, and then Lawler officially inaugurates it on February 1, 1997. On September 13, six months after Kippenberger’s death, a subway entrance he designed for his “Metro Net”—a system linking Syros, Greece; Kassel; and other locales—goes on view. Bottino opens on 10th Avenue in 1998, with backing from dealers in the neighborhood, and Oursler and Kelley stage “The Poetics Project,” which is “the most irritating show in New York,” Ken Johnson writes. (“Mike loved that quote,” Oursler tells Artforum after Kelley’s passing in 2012.) 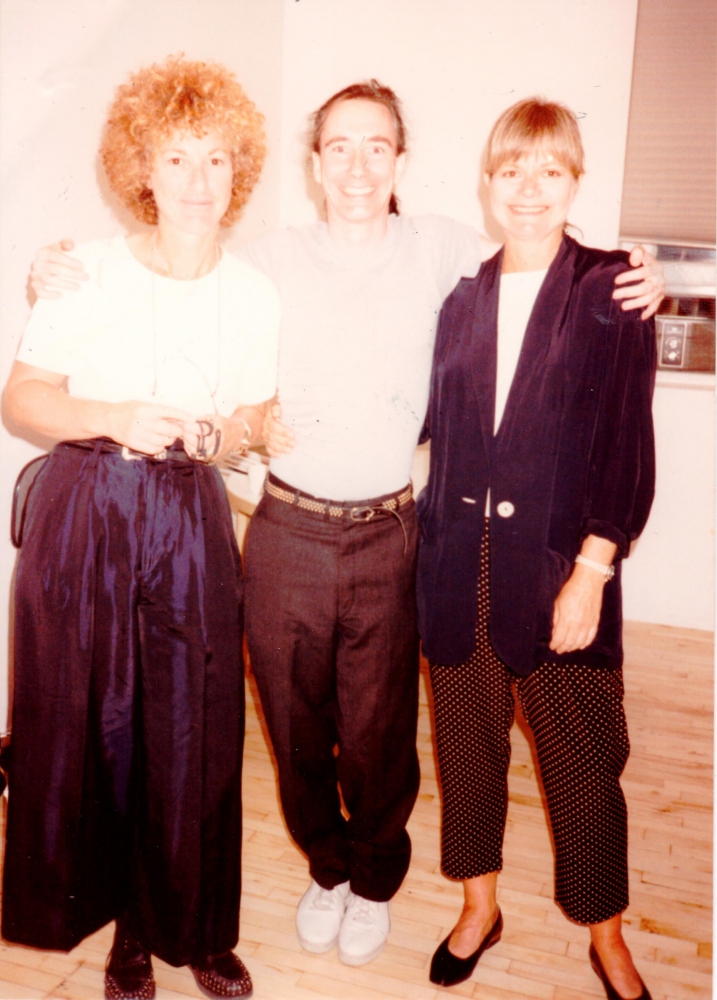 Andreas Slominski offers a variety of animal traps (some very charming) in September of 1999, and on October 23, Carroll Dunham paints his way deeper into the psychological jungle. American Psycho is released on April 14, 2000, with Christian Bale starring as the investment banker and serial killer Patrick Bateman; “Men in the City” pieces adorn the walls of his apartment. On April 22, a survey by Daniëls goes up at the gallery.

September 11, 2001. September 15, Gary Simmons. A wishing well swirls in chalk on one wall. October 27, Olaf Breuning. 2002, T.J. Wilcox. 2003, Catherine Sullivan’s Five Economies, Isaac Julien’s Baltimore, and this message on a February 15 invitation for a Lawler show: “NO DRINKS FOR THOSE WHO DO NOT SUPPORT THE ANTI-WAR DEMONSTRATION.” Indelible clowns fill Sherman’s 2004 outing. In 2005, two years after his death, Goldstein’s burningly cold early ‘80s paintings are surveyed. Gianni Motti organizes a séance with a psychic on March 30, 2006, to conjure the spirit of John Lennon, who never arrives. Next: Julien’s Looking for Langston.

Paulina Olowska and Sterling Ruby appear in 2007, and Shaw closes out the year with “Dr. Goldfoot and His Bikini Bombs,” but he soon decides it’s too restrained. During the winter break, he adds more works; the show runs for two months. Robinson’s sly ‘80s paintings are revisited in April 2008, and Miller gilds his typically fecal-colored forms for December. 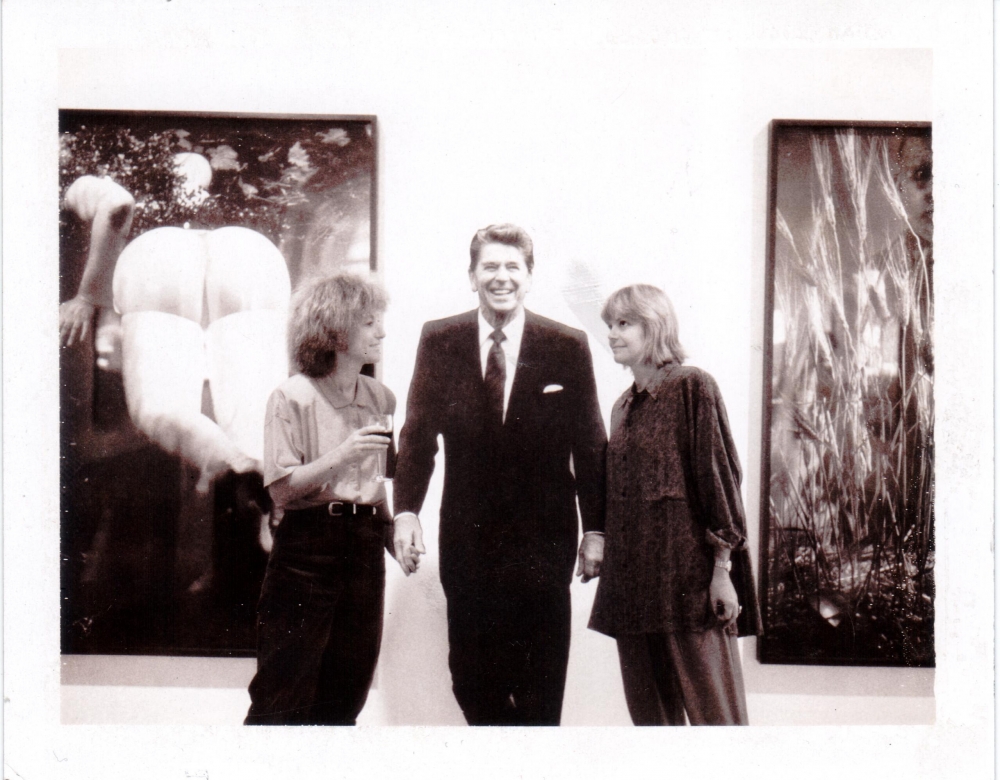 “The Pictures Generation” is held at the Metropolitan Museum of Art in 2009—and David Maljkovic is at the gallery, bearing Images With Their Own Shadow. Metro’s bookkeeper, Photios Giovanis, opens Callicoon Fine Arts in that upstate hamlet. André Butzer’s antic not-quite-abstractions in 2010, and “Fitting at Metro Pictures” in 2011, Lawler stretching the dimensions of her photos on giant adhesives to fit the walls of 519 West 24th. Dozens of plastic shopping bags adorn B. Wurtz’s Bunch #2, in a June survey of the artist organized by White Columns director Matthew Higgs. Tris Vonna-Michell, September.

A dog periodically plays dead on a rug for Nina Beier’s Tragedy, in Gianni Jetzer’s “Dogma” 2012 summer show, and two pilots visit the gallery to realize Sperm of Two Pilots for Slominski’s September exhibition. MoMA mounts a Sherman retrospective. On October 29, 2012, Hurricane Sandy batters New York, as the installation of a Gary Simmons survey is just starting. The gallery floods, but after repairs that show opens exactly one month later 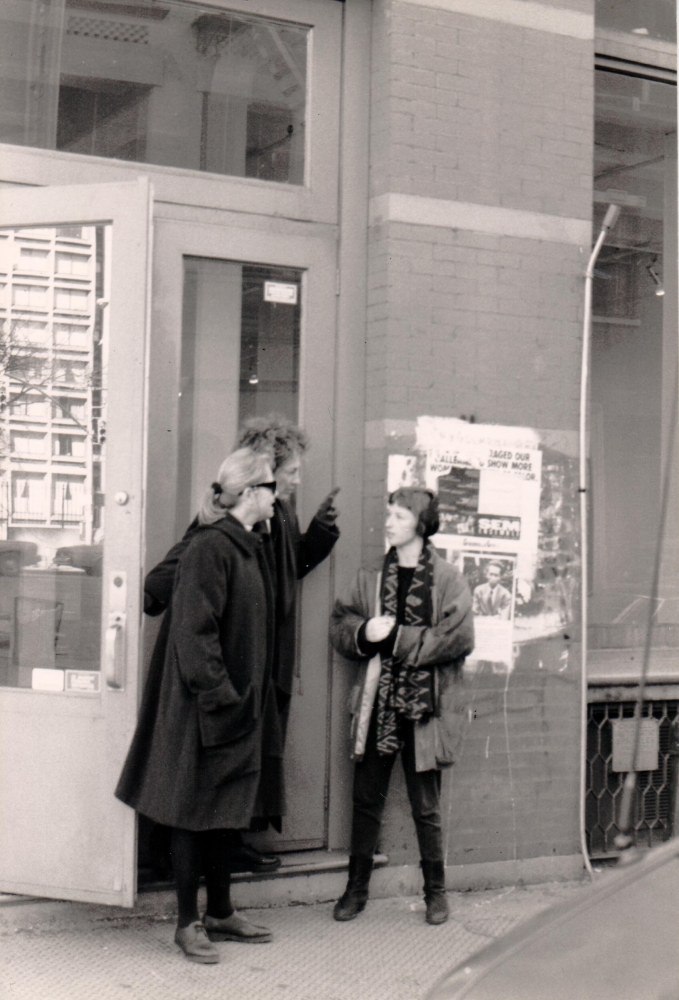 The estate of Bender and Latifa Echakhch join Metro in 2020. The gallery closes on March 14 because of the coronavirus lockdown, but Gary Simmons’s latest show is hung and officially opens five days later. It can only be viewed online. Beginning April 3, a digital film festival of Metro artists runs on more than a dozen weekends. Simmons’s exhibition reopens to the public July 7, and Sherman’s latest photos are unveiled September 26. To ensure social distancing, only ten people can enter at a time. On November 14, the gallery turns 40.

After discussing various ideas, Louise Lawler proposed a "Before Metro" show. The concept of the show would be for artists who have shown at Metro Pictures to present a work that was made before their relationship with the gallery.  The history of the gallery has been written by those who were invited to participate over the years and that invitation was informed by the work that preceded the gallery's involvement.  The more we thought about it, the more apt that framework felt as a way to acknowledge the gallery's history and pinpoint its influence.

Louise Lawler
Half Dozen
circa 1971

black and white video with sound

Fred Wilson
The Last Murdered Black Youth, 1990
wax head, mid-twentieth century in a wood and glass vitrine with a descriptive label
Work was part of a larger installation entitled "The Other Museum"
Courtesy of the artist